There is really a great tool made available by VMware for the professionals, who want to explore their skills in VMware Virtual SAN (vSAN). There is free e-learning (1 Hour) available, you just need to create an account on VMware portal (if don't have one). You can use the link below and then click on add to my enrollment button, after that login using your account on VMware portal,

To start further add on to your knowledge on VMWare VSAN Technology visit below page for details:-

Posted by RavinderK at 8:12 AM No comments:

2.1 Disk Controllers
Each vSphere host that contributes storage to the Virtual SAN cluster requires a disk controller. This can be a SAS or SATA host bus adapter (HBA) or a RAID controller. However, the RAID controller must function in one of two modes:
•             Pass-through mode
•             RAID 0 mode
Pass-through mode, commonly referred to as JBOD or HBA mode, is the preferred configuration for Virtual SAN because it enables Virtual SAN to manage the RAID configuration settings for storage policy attributes based on availability and performance requirements that are defined on a virtual machine. For a list of the latest Virtual SAN certified hardware and supported controllers, check the VMware Compatibility.
Guide for the latest information: http://www.vmware.com/resources/compatibility/search.php
2.2 Hard Disk Drives
Each vSphere host must have at least one SAS, near-line SAS (NL-SAS), or SATA magnetic hard-disk drive (HDD) to participate in the Virtual SAN cluster. HDDs account for the storage capacity of the Virtual SAN shared datastore. Additional magnetic disks increase the overall capacity and can also improve virtual machine performance, because the virtual machine storage objects might be striped across multiple spindles.
2.3 Flash-Based Devices
Each vSphere host must have at least one flash-based device—SAS, SATA, or PCI Express SSD—to participate in the Virtual SAN cluster. Flash-based devices provide both a write buffer and a read cache. The larger the flash based device capacity per host, the larger the number of I/Os that can be cached and the greater the performance results that can be achieved.
NOTE: Flash-based devices do not contribute to the overall size of the distributed Virtual SAN shared datastore.
They count only toward the capacity of the Virtual SAN caching tier.

3.1 Network Interface Cards
Each vSphere host must have at least one network adapter. It must be 1Gb Ethernet or 10Gb Ethernet capable, but VMware recommends 10Gb. For redundancy, a team of network adapters can be configured on a per-host basis. VMware considers this to be a best practice but not necessary in building a fully functional Virtual SAN cluster.
3.2 Supported Virtual Switch Types
Virtual SAN is supported on both the VMware vSphere Distributed Switch™ (VDS) and the vSphere standard switch (VSS). No other virtual switch types are supported in the initial release.
3.3 VMkernel Network
On each vSphere host, a VMkernel port for Virtual SAN communication must be created. A new VMkernel virtual adapter type has been added to vSphere 5.5 for Virtual SAN. The VMkernel port is labeled Virtual SAN traffic.
Figure 1. Virtual SAN VMkernel Adapter Type 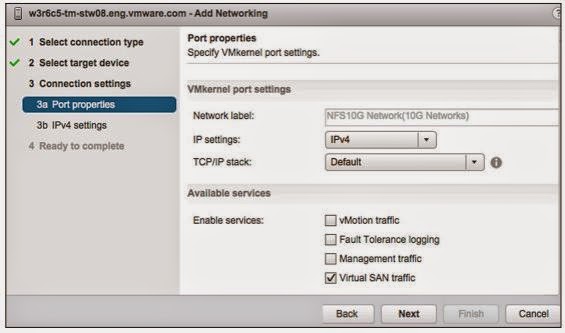 This new interface is used for host intra cluster communications as well as for read and write operations whenever a vSphere host in the cluster is the owner of a particular virtual machine but the actual data blocks making up that virtual machine’s objects are located on a remote host in the cluster. In this case, I/O must traverse the network configured between the hosts in the cluster. If this interface is created on a VDS, the VMware vSphere Network I/O Control feature can be used to set shares or reservations for the Virtual SAN traffic.

More Details:- https://communities.vmware.com/servlet/JiveServlet/previewBody/25933-102-2-34324/VMware_Virtual_SAN_Whats_New.pdf
Posted by RavinderK at 1:10 AM No comments: