Note:- this article is Only for test and learning purpose not for production...

For test and development you can host esxi as a Nested VM and create HA/DRS cluster in that. But if you want to use FT in that scenario you need to 3 extra parameter under configuration parameters option 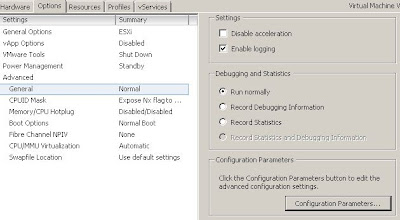 Then you need three row  replay.supported true  replay.allowBTOnly true, replay.allowFT true after adding this it look like see the snap below:- 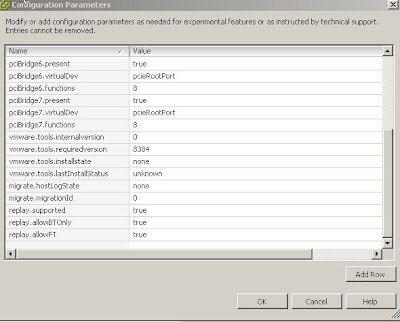 After adding the rows you can click ok and then again ok, now if all other requirement of FT are configured you can enable the FT on VM even this is running on nested esxi host.

Every VM have some amount of Memory configured. So when we power on the VM, vmkernel have to create the Swap file for VM (this file is different file than vmdk file), so that in case of memory contention overallocated memory can be delivered (in the storage there must be free space available to create that file otherwise we can't power on the VM).

Swap File is calculated using the below formula:-

Suppose VM is configure with 2048 MB of Memory and Reserve for that VM is 512 MB then swap file size is 1536 MB as per above formula:-

Even you reserve 100 % allocated memory to VM swap file still created but with 0KB in size.

Swap file created even you have enough memory on host, but vmkernel only use this file (in case of memory contention)  if demand of memory is more than the available amount of Memory on Host (ESXi).

Posted by RavinderK at 4:38 AM No comments:

What is Host Profile ?

How to Use Host Profile ?

You perform host profiles tasks in a certain workflow order.
You must have an existing vSphere installation with at least one properly configured host.


Note:- Using host profiles is only supported for VMware vSphere 4.0 hosts or later

You create a new host profile by using the designated reference host's configuration.
A host profile can be created from:

Attach Profiles from the Host

1 In the Host and Clusters view, select the host to which you want to attach a profile.
2 Right-click the host and select Host Profile > Manage Profile.
NOTE   If no host profiles exist in your inventory, a dialog appears asking if you want to create
and attach the host to this profile.
3 In the Attach Profile dialog, select the profile to attach to the host and click OK.
The host profile is updated in the Summary tab of the host.

Apply a Profile from the Host

You can apply a profile to a host from the host's context menu.
Prerequisites
The host must be in maintenance mode before a profile is applied to it.
Procedure
1 In the Host and Clusters view, select the host to which you want to apply a profile.
2 Right-click the host and select Host Profile > Apply Profile.
3 In the Profile Editor, enter the parameters and click Next.
4 Continue until all the required parameters are entered.
5 Click Finish.
Compliance Status is updated.

If you want to change the snapshot files location for different datastore than default, you need to shut down the VM first. Then remove the VM from inventory, and then use esxi Local Shell or SSH Shell and edit the .vmx file of that VM with vi editor and add the lines at the end of the file:-

Snapshot.redoNotWithParent = “true”
workingDir  = “Location of your datastore”    like see the snapshot below:-

After this save the file and add the VM to inventory back using the vSphere client. When you power on the VM, and after this you will take snapshot the snapshot, files will created under the defined datastore. You can browse and confirm the snapshot file  are under the new datastore like:-

So now snapshot files location is as per your requirement.


If you want to change the swap file location to different datastore than default, you need to shut down the VM first. Once VM is offline then go to Edit Setting of that VM and then click on Options tab like see the screenshot below:- 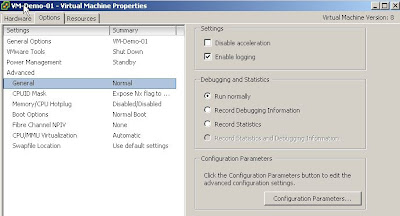 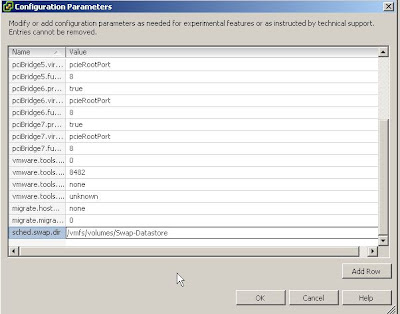 Under the name filed you need to type “sched.swap.dir” and in the value field you need to type the path of datastore where you want swap files. Like in my case I have dedicated datastore for Swap files, so I have defined the path “/vmfs/volumes/Swap-Datastore” and the click on OK
After that when you powered in that VM the swap file get created under new datastore. You can browse and confirm thenswap file is under this like:-

So now swap file location is as per your requirement.


Security and the Virtualization Layer (esxi)

The ESXi kernel, user-mode applications, and executable components such as drivers and libraries are located at random, non-predictable memory addresses. Combined with the non-executable memory protections made available by microprocessors, this provides protection that makes it difficult for malicious code to use memory exploits to take advantage of vulnerabilities.

Each time ESXi boots, it measures the VMkernel and a subset of the loaded modules (VIBs) and stores the measurements into Platform Configuration Register (PCR) 20 of the TPM. This behaviour is enabled by default and cannot be disabled. Hardware support for this feature is fully tested and supported by VMware and its OEM partners.

NOTE:-  Not all VIBs are measured as part of this process.

The VMware TPM/TXT feature that leverages the fully tested hardware support is suitable for a proof-of-concept that demonstrates monitoring of certain TPM PCR values, by alerting when any values change from one boot to the next. Third-party solutions could use this feature to detect changes to VIB measurements stored in these PCRs for the following cases:
For more details you can see:-
http://pubs.vmware.com/vsphere-50/topic/com.vmware.ICbase/PDF/vsphere-esxi-vcenter-server-50-security-guide.pdf

Posted by RavinderK at 6:01 PM No comments:


ESXi 5.0 introduces a new generation of virtual hardware with virtual machine hardware version 8, which includes the following new features:-
Posted by RavinderK at 5:28 AM No comments:

Resource Pool Management (vSphere5)
You can create, manage and delete the Resource Pool, While you are managing stand-alone host esxi (before adding to vCenter Server). Once you add host to vCenter Server after that Resource pool management is only using vCenter, direct connection to host (esxi) do not allow resource pool management, until you remove host (esxi)  from vCenter inventory.
Posted by RavinderK at 6:26 AM 1 comment:

Wait till next promotion !!
Meanwhile if not yet completed, you can go for VCA (VMware Certified Associate) exams for free !
VMware Certified Associate certification is available now for all the who have attended VMware vSphere Training program, or even who have the vmware product knowledge and want to have some recognition to that, You can go for the VCA certification.


So many of you have attended the training for VMware vSphere: Install Configure Manage [5.x], even some of you are already VCP5, so congrates to becoming VCP and welcome to VCP community, those who are yet preparing for exam or not find time to take the exam. There is exam voucher available for VCP510 you can get 25% discount on your exam total cost.

Take the exam soon and become VCP. Good Luck for your exam.

Posted by RavinderK at 9:23 PM No comments:

While a VMFS-3 which is upgraded to VMFS-5 provides you with most of the capabilities as a newly created VMFS-5, there are some differences. Both upgraded and newly created VMFS-5 support single-extent volumes up to 64TB and both support VMDK sizes of ~2TB, no matter what the VMFS file-block size is. However additional differences, although minor, should be considered when making a decision whether to upgrade to VMFS-5 or create new VMFS-5 volumes.

VMFS-5 upgraded from VMFS-3 continues to use the previous file-block size, which may be larger than the unified 1MB file-block size. This can lead to stranded/unused disk space when there are lots of small files on the datastore.

No Increase to the Maximum Number of Files per Datastore

VMFS-5 upgraded from VMFS-3 continues to have a file limit of 30,720 rather than new file limit of > 100,000 for newly created VMFS-5. This has an impact on the scalability of the file system.

VMFS-5 upgraded from VMFS-3 continues to use MBR (Master Boot Record) partition type; when the VMFS-5 volume has grown beyond 2TB, it automatically and seamlessly switches from MBR to GPT (GUID Partition Table) with no impact on the running virtual machines.

For more details you can see the link below:-
http://www.vmware.com/files/pdf/techpaper/VMFS-5_Upgrade_Considerations.pdf
Posted by RavinderK at 3:36 AM No comments:

The following is a complete list of enhancements made in VMFS-5.

In earlier versions of VMFS, the largest single extent was 2TB - 512 bytes. An extent is a partition on which one can place a VMFS. To create a 64TB VMFS-5, one needed to create 32 x 2TB extents /partitions and join them together. With VMFS-5, this limit for a single extent/partition has been increased to 64TB. This significantly reduces the management overhead when using very large VMFS volumes.

VMFS-5 introduces smaller sub-blocks. Sub-blocks are now 8KB rather than 64KB as used in the earlier versions. With VMFS-5, small files (< 8KB, but > 1KB) in size will consume only 8KB rather than 64KB. This will reduce the amount of disk space stranded by small files. Also, there are many more sub-blocks in VMFS-5 than there were in VMFS-3 (32,000 on VMFS-5 compared to approximately 4,000 on VMFS-3).

VMFS-5 introduces support for very small files. For files less than or equal to 1KB, VMFS-5 uses the file descriptor location in the metadata for storage rather than file blocks. When these files grow beyond 1KB, they will then start to use the new 8KB sub-blocks. This will again reduce the amount of disk space stranded by very small files.

VMFS-5 introduces support for greater than 120,000 files, a four-fold increase when compared to the number of files supported on VMFS-3, which was approximately 30,000.

The Atomic Test & Set (ATS) Hardware Acceleration primitive is now used throughout VMFS-5 for file locking. ATS is a part of VAAI (vSphere Storage APIs for Array Integration). This enhancement improves the file locking performance over earlier versions of VMFS.


For more details you can see the link below:-
http://www.vmware.com/files/pdf/techpaper/VMFS-5_Upgrade_Considerations.pdf
Posted by RavinderK at 3:30 AM No comments:

Note: C:\ProgramData may be a hidden folder.
If vCenter Server is installed on any other Windows operating system, <directory_path> is %ALLUSERSPROFILE%\Application Data\VMware\VMware VirtualCenter\Sysprep\ which generally translates to C:\Documents and Settings\All Users\Application Data\VMware\VMware VirtualCenter\Sysprep\ by default.

if vCenter is appliance then /etc/vmware-vpx/sysprep/

Under above mentioned location as per the vCenter version you have there are folder for Operationg Systems
like for Server 2003 32 bit there is folder svr2003. you need to copy the sysprep files after this while you deploy the VM using template or clone, wizard will offer you the choice to customize the OS...

for more details you can see
http://kb.vmware.com/selfservice/microsites/search.do?language=en_US&cmd=displayKC&externalId=1005593

Posted by RavinderK at 2:06 AM No comments: